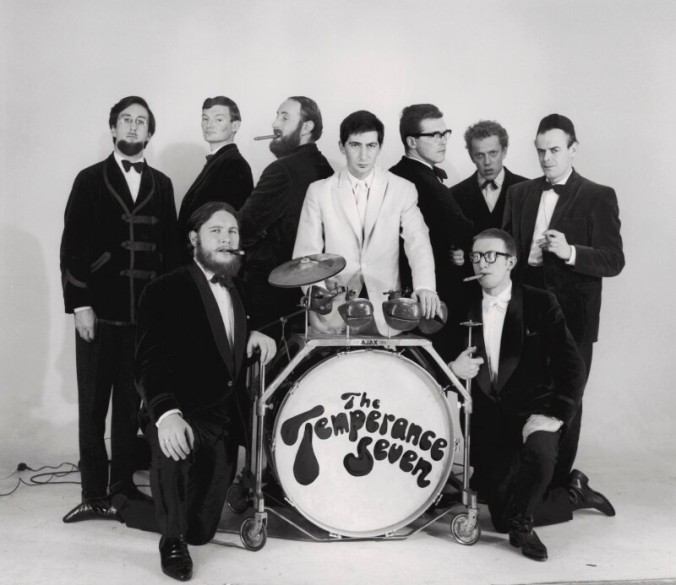 The 1961 number 1s really were all over the place, and this is as sure a sign as any. The Temperance Seven were a group of young men performing jazz covers from the 20s and 30s, and their cover of You’re Driving Me Crazy was an affectionate look back to an earlier period in recorded music – indeed, the era in which vinyl recordings first became popular. They were retro before the term existed (I think).

The Temperance Seven were founded at Christmas in 1955 by students at the Chelsea School of Art. Its three founder members were Paul McDowell on trombone, Phillip Harrison on banjo and drummer Brian Innes. Eventually they expanded to a nine-piece, and their name was suggested to them by Douggie Gray from the Alberts, an influential comedy group of the era. Why the number seven, when there were nine of them? It’s an ironic use of the word ‘temperance’ which my tired brain doesn’t really get right now.

In 1960 they recorded with Goons comedian Peter Sellers, and their producer was George Martin. Martin had joined EMI in 1950, and took over the Parlophone imprint five years later. It was regarded as relatively unimportant back then, and was mostly used for classical, novelty and comedy recordings. Martin’s work with Sellers became well-known, and more and more comedians began working with him, so The Temperance Seven seemed a natural act for Martin to produce.

You’re Driving Me Crazy had been written by Walter Donaldson in 1930. The song became a hit for several acts, including Lee Morse. It also featured in the racy Betty Boop cartoon, Silly Scandals, the following year. While singing the song, Boop’s dress kept falling down, to reveal a lacy bra and make her squeal. Shocking stuff at the time.

Like many of Donaldson’s songs, this track became a standard, and was later recorded by Frank Sinatra, Mel Tormé and Peggy Lee, to name but a few. Donaldson also wrote Makin’ Whoopee, My Baby Just Cares For Me, and Yes Sir, That’s My Baby.

I’ve been a huge fan of The Bonzo Dog Doo-Dah Band for decades, and have seen The Temperance Seven name-checked many times in relation to them, so I had high hopes for You’re Driving Me Crazy, but was left rather disappointed. There’s none of the anarchic spirit of the Bonzos here, it just seems a very straight and stiff run-through of a Donaldson song that isn’t as good as any of the ones I’ve listed above. McDowell’s vocal doesn’t have the character that dear old Vivian Stanshall had. I now understand why some Bonzo band members would be annoyed by the Temperance Seven comparison – it’s quite lazy really.

The intro and the end go on far too long too, though that is entirely in keeping with most recordings of the 20s and 30s. Having said that, I like Martin’s production just before the final vocal kicks in, in which the instruments create this kind-of circular sound (my apologies, I’m not great with proper musical terms).

Nonetheless, for a time The Temperance Seven were big, with Paul McDowell having to quit his role in the Experimental Theatre Club revue. He was replaced by future Monty Python’s Flying Circus member Terry Jones.

Later in the summer of 61 they appeared at the London Palladium for a fortnight run as top of the bill. It was never going to last, though, and the original incarnation disbanded in the mid-60s, just as the Bonzos were starting to make a name for themselves with riotous performances at the Bull’s Head in Barnes.

Chris Hook took charge of the band when they reformed in the 80s, and this incarnation still tours today. McDowell went on to star in Porridge as Mr Collinson, and died aged 84 in 2016. And producer George Martin? Well, his name is going to crop up a fair few more times, obviously.