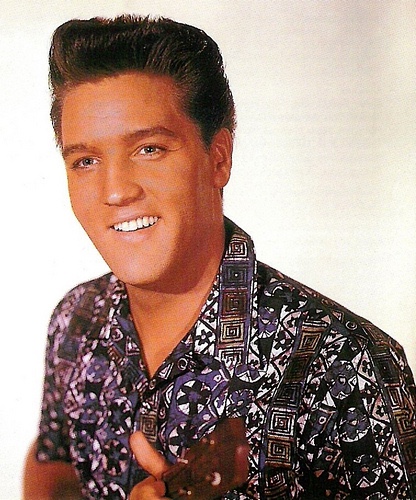 Before the Beatles, Elvis was untouchable when it came to chart domination in the UK, but by this point his record sales had dipped somewhat in the US. Despite this, (Marie’s the Name) His Latest Flame/Little Sister (both written by Doc Pomus and Mort Shuman, and recorded during another marathon session in June), was one of his better number 1 releases.

After several attempts at various European sounds, (Marie’s the Name) His Latest Flame is a throwback to Presley’s early years, and is all the better for it. You can’t really go wrong when using a Bo Diddley beat, and Elvis doesn’t dominate the track, letting the musicians really shine. The lyrics contain a twist, as it turns out Marie was Elvis’s woman, but she’s ran off with ‘a very old friend’, only a day after saying she’d be his for eternity. Poor Elvis. The lack of vocal showboating also helps suggest that, for a change, he’s a loser this time around.

This is one of my favourite Elvis number 1s, although this may be, in part, down to my love of The Smiths. The band lifted the rhythm and used it on Morrissey’s ode to fairgrounds, Rusholme Ruffians on 1985’s Meat is Murder. Morrissey and Marr shared a love of 50s pop, and Elvis was one of the most famous people to feature on the sleeve of a Smiths record – namely 1987’s Shoplifters of the World Unite. Choosing not to hide his influence, the band would play live performances of Rusholme Ruffians as a medley with (Marie’s the Name) His Latest Flame, as you can hear on posthumous live album Rank (1988)

Flip side Little Sister showcases a more raw Elvis sound than we’ve heard for some time. Okay, it’s a complete rip-off of Johnny Kidd & The Pirates’ groundbreaking Shakin’ All Over, but I’d rather hear that than another Wooden Heart. We’re on potentially dodgy ground lyrically, as Elvis is so hurt by his lover this time (she’s only gone and ran off with Jim Dandy), he’s decided to chance his arm with her little sister. We’re not made aware of how young she is, but this verse is questionable:

‘Well, I used to pull your pigtails
And pinch your turned-up nose
But you been a growin’
And baby, it’s been showin’
From your head down to your toes’

Hmm. Nonetheless, it’s great to hear the rock’n’roll side of Elvis once more. The booming bass vocal of Jordanaire Ray Walker is superfluous, however.

Unlike so many singles in 1961 that came and went at number 1 after a week, Presley’s usually stuck around a while longer, and this was no exception, spending four weeks at the top during the 10th anniversary of the birth of the UK charts.

9 November: Miss United Kingdom, the Welsh-born Rosemarie Frankland became the first British winner of the Miss World beauty contest. The competition had been running for 11 years at this point, and had taken place at the Lyceum Theatre in London.

4 December: A sexual revolution began when birth control pills became available on the National Health Service. The move would have a far-reaching effect on society, and you could argue the swinging 60s began on this day.