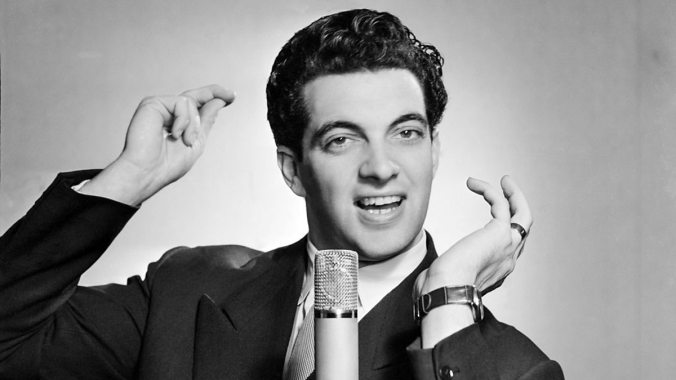 It had been four years since Frankie Vaughan last had a number 1 with The Garden of Eden – the longest gap for a number 1 artist up to this point. However, he had continued to do well in the charts, occasionally troubling the top 10. How did Vaughan weather the storm of rock’n’roll, when so many other crooners couldn’t? Perhaps it was that ‘Mr Moonlight’ was unique when so many other singers of his ilk were too similar – too smooth and safe? His two number 1s suggest that might be the case. The Garden of Eden was tougher than most easy listening tunes in 1957, and Vaughan’s performance on Tower of Strength is not only unique, it’s extraordinary.

Since his previous chart-topper, Vaughan had continued to score plenty of hits – Man on Fire, Gotta Have Something in the Bank Frank (the latter was a duet with The Kaye Sisters) and Kisses Sweeter than Wine in 1957. Kewpie Doll in 1958, and Come Softly to Me (with The Kaye Sisters again) and The Heart of a Man in 1959, were all top 10 hits.

The song was written by Burt Bacharach, making this his third number 1. However, the lyrics came from Bob Hilliard, not Hal David, his better-known and more frequent collaborator. It had already been a hit in the US for singer-songwriter Gene McDaniels, but he didn’t have the following that Vaughan had in the UK, and his version barely scraped into the top 50.

Vaughan’s version begins with some rather bawdy-sounding trumpets, sounding like incidental music from a Carry On film. Despite the song’s title, the singer’s imposing physique and the bravado behind the performance, Vaughan is anything but a tower of strength in this track. He wants to break free from his relationship, and he lists the things he’d like to say, before imagining how she’d respond. He sounds not unlike Tom Jones in the way he bellows the vocals, and often that’s something that I’d run a mile from, but in the next section in which the horns turn into a stomp, he cuts loose so much he sounds more like an early soul singer.

He grunts, he growls, he sings ‘knees’ in a falsetto. He sounds unhinged. Vaughan has shot up in my estimation, and is now one of my favourite crooners. A little bit of madness goes a long way with me. I haven’t heard the original by McDaniels, or the other 1961 version from Paul Raven (later to become grotesque glam rock paedophile Gary Glitter), but I doubt either of them can beat Vaughan for entertainment value.

The hits finally did dry up for Frankie Vaughan in 1963. He suffered with ill health for many years, nearly dying of peritonitis in 1986, which curtailed his role in a stage version of 42nd Street at London’s Drury Lane. Despite his problems, he continued performing until shortly before his death from heart failure on 17 September 1999, aged 71.

The Scouse singer may have been most famous for his trademark top hat and cane, but beneath the glitz was a good heart. He gave away his royalties from Green Door in 1956 to Boys Clubs, by way of thanks for the help they gave him during his time as a refugee in Lancaster during World War Two. And in 1964 he was appointed to a committee to give advice on juvenile delinquency. Four years later he persuaded gangs in Glasgow to give up their knives in an amnesty.

4 thoughts on “130. Frankie Vaughan with Accompaniment directed by Ivor Raymonde – Tower of Strength (1961)”