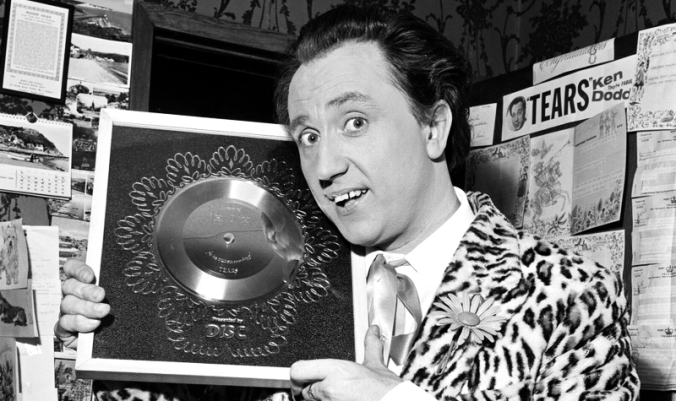 Comedian Ken Dodd’s Tears’ reign of the singles chart lasted a mind-boggling five weeks. Not only that, it was the best-selling single of 1965 – a year featuring some of the greatest number 1s there has ever been. How did this happen?

Kenneth Arthur Dodd was born 8 November 1927 in Knotty Ash, Liverpool. He sang in the local church choir, and at 14 he left school to work for his father as a coal merchant. Despite this, he was in love with the idea of being an entertainer, and his father bought him a ventriloquist’s dummy, which he named Charlie Brown. Dodd began his showbiz career performing at the local orphanage. His trademark bucked teeth came about as a result of Dodd being dared by his friends to ride his bike with his eyes closed.

His big break came in 1954 when he turned professional at the age of 26. He performed as Professor Yaffle Chucklebutty, Operatic Tenor and Sausage Knotter at the Nottingham Empire. It’s fair to say his eccentric humour was already well in place by this point. He gained top billing for the first time in Blackpool in 1958. With his unusual appearance, quickfire one-liners, and lengthy performances, he became a big star.

Over the years his tales of the Diddy Men, jam butty mines and Knotty Ash (where he lived all his life) made him a true family entertainer. His shows became so long he even entered the Guinness Book of Records for the world’s longest joke-telling session – 1,500 jokes in three-and-a-half hours.

His sets would also feature songs. Dodd was no great shakes as a singer, but he wasn’t bad either, and off the back of his fame he started releasing singles, his first being Love is Like a Violin in 1960. It went to number eight, but for the next few years his records only made it into the top 30, including Happiness, which became his signature song.

Which makes it unlikely that anyone including Dodd would have expected Tears to do as well it did. Originally called Tears for Souvenirs, the words were by Frank Capano and music by Frank Uhr. Recorded by Rudy Vallee in 1929, it was based on Delilah’s aria Mon cœur s’ouvre à ta voix (Softly awakes my heart) from Act II of Camille Saint-Saëns’s opera 1877 opera Samson and Delilah.

Dodd’s performance on Tears, like most of his singles, is played straight, and yes, he sings it well enough, although it’s a very mannered performance, with every line pronounced to perfection. But it’s not even Dodd’s best single – Happiness is more memorable (it’s the only other one I’ve heard and I can’t say I’m in a hurry to hear any others. My only prior knowledge of it came from a snippet being sang in The Bonzo Dog Doo-Dah Band’s I’m Bored in 1967).

It’s a throwback to the pop singles of the early-to-mid-50s. As the crimes of the Moors Murderers came to light (see below), I’d imagine that the British public, whether subconsciously or not, chose to a very safe song to listen to that was reminiscent of more innocent times. This can’t be proved though, and it still doesn’t explain exactly how big this song was. In addition to being the best seller of 1965, Tears was the third biggest single of the 60s and the only one in the top five that wasn’t by fellow scousers, The Beatles. In 2017 it was revealed as the 39th biggest single of all time. Incredible statistics for such a random, average track. Basically, I don’t know why it was so popular. It’s yet another example of the weird and wonderful world of the UK singles chart.

Dodd’s music career peaked in the mid-60s, with further top ten entries for The River (Le Colline Sono In Fioro) and Promises. Occasionally he branched out into straight acting, in theatre (a production of Twelfth Night in 1971), TV (Doctor Who in 1987) and cinema (Kenneth Branagh’s version of Hamlet in 1996). I remember finding Dodd funny as a child and wondering what the tax evasion case of 1989 was all about. I didn’t like the idea of such an odd man as Dodd behind bars, but he was acquitted and the media spotlight didn’t hurt his career.

Dodd was a national treasure and one of the last great British eccentrics. Over the years he recieved an OBE, was knighted and received award after award. Behind the laughter, like with so many comics, there was sadness. Dodd was in a relationship with Anita Boutin from 1955 until she died of a brain tumour in 1977.

A year later he fell in love with Anne Jones, and they married on 9 March 2018, two days before he died. They had wanted children but were unable, and the details of his tax evasion had included failed rounds of IVF. When they wed, Dodd had just been released from hopsital, where he had been for six weeks due to a chest infection.

Ken Dodd died in his childhood home in Knotty Ash on 11 March 2018, aged 90. The showbiz world mourned the loss of a beloved figure.

Weeks at number 1: 5 (30 September-3 November) *BEST-SELLING SINGLE OF THE YEAR*

7 October: A 27-year-old stock clerk named Ian Brady was charged with the murder of 17-year-old apprentice electrician Edward Evans the night before. Myra Hindley’s brother-in-law David Smith had witnessed Brady striking Evans with the flat of an axe and then strangling him with electrical cord. Smith had been friends with Brady for a while, but when he told his wife Maureen Hindley what he had seen, she told him to ring the police. The arrest led British Transport Police to discover suitcases belonging to Brady at Manchester Central railway station. Inside one of them were incriminating, disturbing photos of a young girl, as well as a tape of her voice pleading for help.

11 October: Myra Hindley was arrested and both she and Brady were charged with Evans’ murder. Police searches led them to believe that the duo were responsible for the murders of several children reported missing in the Manchester area over the last few years.

16 October: The body of 10-year-old Lesley Ann Downey was found on Saddleworth Moor.

18 October: The Magic Roundabout premiered on BBC One.

21 October: As news reports pieced together the horrific story of the Moors Murderers, Brady and Hindley were charged with Downey’s murder.

22 October: The drama in Rhodesia continued, with African countries demanding that the UK use force to prevent it from declaring unilateral independence.

24 October: Police found the decomposed body of 12-year-old John Kilbride, who had been missing since November 1963.

29 October: Brady and Hindley were charged in court with the murders of Evans, Downey and Kilbride.