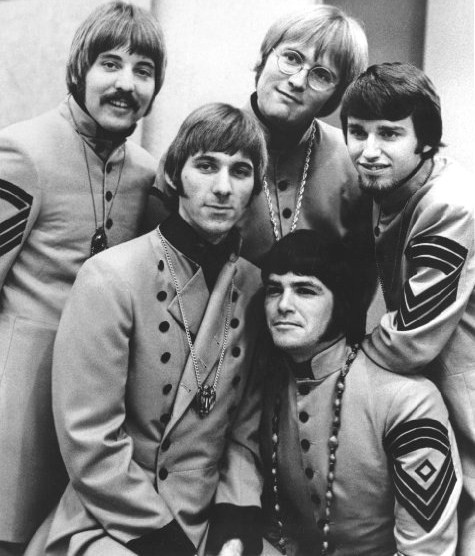 The Union Gap featuring Gary Puckett enjoyed four weeks at number 1 with their controversial (now, not so much then) hit Young Girl.

Lead singer Puckett was born in Hibbing, Minnesota on 17 October 1942, but grew up in Yakima, Washington, close to Union Gap. Puckett learnt to play guitar in his teens, and dropped out of college in the early 60s to play in local bands. One of these, The Outcasts, were a hard rock band that made two singles, but got nowhere.

By 1966 the group were touring the Pacific Northwest. Their manager, Dick Badger (!) renamed them The Union Gap in early 1967. Thanks to The Beatles, it became fashionable to dress in military uniform, so Badger had the Union Gap start wearing Union Army-style Civil War uniforms as their gimmick. Record producer and songwriter Jerry Fuller was impressed with their demo and signed them to CBS Records.

In November 1967 they released their debut single as The Union Gap featuring Gary Puckett. Woman, Woman concerned a man who feared his lover would cheat on him. It was a hit in the US, and they followed it up with Young Girl, written and produced by Fuller. It isn’t clear who in the band played on the single, as members of The Wrecking Crew were involved, but that’s the late, great Hal Blaine playing drums.

There’s few songs less appropriate to be caught listening to in the #metoo era. Featuring an impressively earnest tenor vocal from Puckett, the protagonist has been fooling around with a girl who it turns out is younger than he thought. At least, that’s his side of the story… And now he knows the truth, he’s telling her to run away. That in itself might sound like he’s trying to do the right thing, at least. But it’s more complicated than that.

Are we to believe that the girl hid her age so well, it wasn’t even an issue worth considering, that the singer should maybe ask her about? Apparently not. This was unfortunately a situation many pop and rock stars found themselves in, and has been oft-excused as ‘a different time’. Indeed, if the media chose to, many of the most iconic musicians of the 20th century could have their legacies destroyed with reports of underage sex. It’s something the general public seem to prefer to turn a blind eye to. Even now, people are struggling to know whether to continue to listen to Michael Jackson’s music, myself included.

But I digress, back to the song. I hadn’t listened too hard to the lyrics before, but the singer’s lament becomes more troublesome as it goes on, with some decidedly iffy lyrics in the last two verses in particular.

I’m talking about: ‘Beneath your perfume and your make-up/You’re just a baby in disguise’ and ‘Get out of here/Before I have the time/To change my mind/’Cause I’m afraid we’ll go too far’

After Young Girl performed so well on both sides of the Atlantic, the Union Gap, who changed their billing to Gary Puckett & The Union Gap, decided their purpose was to continue with songs about relationship problems. They had another UK hit with Lady Willpower, but other singles including Over You only did well in the US. Their reputation really isn’t helped by the fact they had a single in 1969 called This Girl Is a Woman Now…

By this point, Gary Puckett & The Union Gap had stopped working with Fuller as they had grown tired of the formulaic power ballads. But by ditching them, they also damaged their careers. With ever dwindling chart positions, Chater and Withem departed. Bement became the bassist, with Barry McCoy the new keyboardist and Richard Gabriel playing the horn, but it was too late.

In 1970 Puckett chose to go solo, confusingly, keeping The Union Gap as his backing band, until sacking them in 1971. A year later, he was ditched by his label.

For the rest of the 70s, Puckett studied acting and dance and performed in productions around Las Vegas. From 1981 onwards he returned to music, becoming a permanent fixture on the oldies circuit, with a different backing group, sometimes referred to as the Union Gap. He was support act for the reformed Monkees (minus Nesmith) in 1986… which must have led to some very weird, creepy performances of Young Girl to middle-aged fans. The rest of the original group disappeared into obscurity.

29 May: Manchester United become the first English team to win the European Cup after defeating Benfica 4-1 in extra time at Wembley Stadium.

7 June: The start of the Ford sewing machinists strike at the Dagenham assembly plant. Female workers had understandably had enough of earning less than their male co-workers. The strike garnered much publicity, ending three weeks later, and was a key reason for the passing of the Equal Pay Act of 1970. As we know though, this didn’t really change anything unfortunately.

8 June: James Earl Ray, the killer of civil rights legend Martin Luther King Jr, was arrested as he attempted to leave London at Heathrow Airport. He was then extradited to Tennessee.