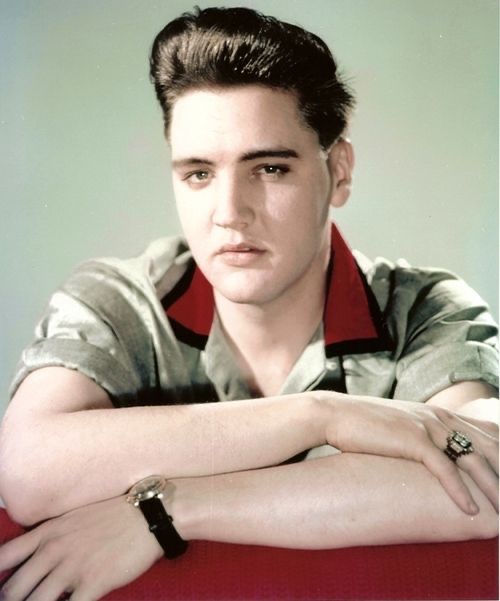 Elvis Presley was drafted into the US army on 24 March 1958. He became a private at Fort Chafee, Arkansas. Back then, all men under 26 were required to register for the draft, and Elvis had done so in 1953, a few months before he first recorded for Sun Records. As the press gathered, Presley told them ‘the Army can do anything it wants with me’, and his trademark quiff was subsequently shorn, giving birth to the famous headline pun ‘Hair today, gone tomorrow’ being used for the first time.

While training, his mother died. She was only 46, and she and Elvis were very close. Nevertheless, the training continued and he joined the 3rd Armored Division in Friedberg, Germany that October. While there he was introduced to amphetamines, which he took to using often, and also learned karate, which he would later become fond of showcasing at live shows.

Fans were obviously concerned about his career. What would happen to his music for the next two years? Luckily for them, RCA producer Steve Sholes and publisher Freddy Bienstock had it all mapped out. They had gathered plenty of material to be released during his hiatus. People would hardly notice his absence.

I Got Stung had been written for Presley by Aaron Schroeder and David Hill. Hill had released his version of All Shook Up before Elvis did, but had more success writing for ‘The King’ than releasing the same material as him. Elvis had recorded I Got Stung at his final Nashville session before leaving for Germany. It’s a slight but fun rock’n’roll track. Beginning with the cry of ”Holy smokes land sakes alive I never thought this would happen to me’, Elvis likens falling in love to being stung by a bee.

The lyrics are fairly cheesy and pedestrian, but Elvis’s vocal transforms it. He performs with rapid-fire delivery, and uses all his trademark mannerisms to lift the song. His backing band also do an admirable job, too.

One Night had been written by Dave Bartholomew (a collaborator with Fats Domino; together they had written Ain’t That a Shame) and Pearl King, and had first been a hit for Smiley Lewis in 1956. Originally concerning a night of sin, Presley recorded a version in 1957, but RCA and Colonel Tom Parker had reservations due to the lyric, ‘One night of sin is what I’m now paying for’. Elvis was keen on the song, though, and with Anita Steinman he reworked it to become ‘One night with you is what I’m now praying for’. Blander, but more palatable for conservative audiences.

Fortunately, it doesn’t really matter, as Elvis’s performance is raunchy enough to suggest he’s planning on sinning anyway. It’s another great vocal, and once more he lifts the whole song. I’m beginning to get why he’s considered such a legend. Neither I Got Stung or One Night are up there with Jailhouse Rock, but they’re pretty good and certainly better than some of the star’s future number 1s.

Upon what would have been Elvis’s 70th birthday, a glut of his most famous singles were re-released in January 2005. I Got Stung/One Night was among them, and knocked the re-release of Jailhouse Rock from the top, earning it the honour of being the 1000th UK number 1. It also became the fourth track ever to be number 1 twice, and it was the third time that an artist has replaced themselves at the top of the charts.